The problem of Buridan's Ass 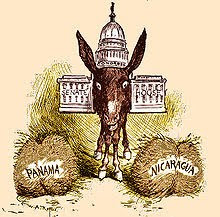 The problem of Buridan's Ass (thanks to Msc Cognitive computing student, Alex, for this reference), which will be very useful in framing the indescisive robot we are building in Patrick's creative robotics class

"It refers to a hypothetical situation wherein an ass is placed precisely midway between a stack of hay and a pail of water. Since the paradox assumes the ass will always go to whichever is closer, it will die of both hunger and thirst since it cannot make any rational decision to choose one over the other.[1] The paradox is named after the 14th century French philosopher Jean Buridan, whose philosophy of moral determinism it satirises.

The paradox did not originate in Buridan's time; it dates to antiquity, being first found in Aristotle's De Caelo, where Aristotle mentions an example of a man who makes no move because he is as hungry as he is thirsty and is positioned exactly between food and drink.

Buridan nowhere discusses this specific problem, but its relevance is that he did advocate a moral determinism whereby, save for ignorance or impediment, a human faced by alternative courses of action must always choose the greater good. Buridan allowed that the will could delay the choice to more fully assess the possible outcomes of the choice. Later writers satirised this view in terms of an ass which, confronted by both food and water must necessarily die of both hunger and thirst while pondering a decision.

A common variant substitutes two identical piles of hay for both hay and water and advances that the ass, unable to choose between the two, dies of hunger alone.

Some proponents of hard determinism have granted the unpleasantness of the scenario, but have denied that it illustrates a true paradox, since one does not contradict oneself in suggesting that a man might die between two equally plausible routes of action. For example, Baruch Spinoza in his Ethics, suggests that a person who sees two options as truly equally compelling cannot be fully rational:

[I]t may be objected, if man does not act from free will, what will happen if the incentives to action are equally balanced, as in the case of Buridan's ass? [In reply,] I am quite ready to admit, that a man placed in the equilibrium described (namely, as perceiving nothing but hunger and thirst, a certain food and a certain drink, each equally distant from him) would die of hunger and thirst. If I am asked, whether such an one should not rather be considered an ass than a man; I answer, that I do not know, neither do I know how a man should be considered, who hangs himself, or how we should consider children, fools, madmen, &c." etc