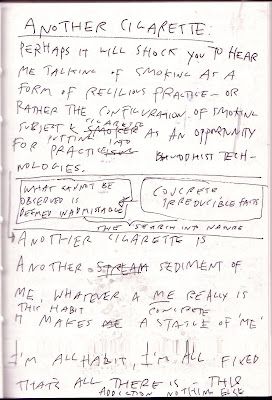 The largest of Ivan’s notebooks was held together by green garden twine.
I begin to read it as the light of the longest day faded:

‘The memories of what I have witnessed act as a filter, but they are only a map of these events and not the actual terrain upon which they unfolded. In 1963 Dr Eee at the Callois Wing of ST Thomas’s hospital advised me to listen to my own language in deconstructing these memories, in order to expose my own filters, the deletions distortions and generalisations that I have unconsciously passed these memories through and made into a baseline habitual state.

My representational filters, explained Dr Eee, include the feelings both inside and outside of the body. But unfortunately I was not in a position to identify these apparently polarised locations. I heard a voice describing these disembodied kinaesthetic phrases: “there is somewhere solid, tickle, preserve pain in the neck warm”. Dr Eee told me that it was my own voice recorded under hypnosis, but I did not recognise it. I was advised by Dr Eee to use breaks and redirections such as Goto and Delay – much like those used in my early computer programs, in fact I was constantly minded of these similarities which Dr Eee seemed oblivious too.

I wanted him to praise me for my superhuman efforts in deconstructing my habitual predicates, or the language of my preferred representational system, but this desire was itself characterised by Dr Eee as an equally filtered preference for self-talk, which Eee called an auditory digital preference. This was revealed in my frequent use of words such as sense, learn, perceive conceive and process. I nagged at myself continually with these vocabularies, to the degree that they pulled me into a semi-hypnotic negative trance, in which I was profoundly entrenched in my own thinking and negative imaginings took me deeper and deeper into consistent anchors or triggers. In a sense I was hypnotizing myself with my own language. But was Dr Eee right in his conviction that changing my language would change my life? Wasn’t the fact that I was so often lost in space evidence that my location in the world was dependent on more than language alone?’

The more I read the more it seemed that Ivan had spent almost all his adult life trying to answer these questions.

At the top of the trunk there’s a small brown leather notebook, like most of Ivan’s notebooks, bursting at the seams. Scratched stained battered as if it has spent a lifetime at war with itself. Loosened pages fall out of the book as I open it. The pages contain what seem like random jottings, mathematical formulas, flow charts and maps. I pick up one of these chaotic pages and read Ivan’s hurriedly scribbled words. Everything he writes appears to have been executed in a maddening rush – time is always chasing Ivan.

‘Uncomfortable memories merge with my sense of the present. I’m minded of the dank riverside house of my youth. The rancid riverside fat of the ancient pariah industries leaks into every room, through the revenant pores of my slaughterer ancestors.

I roll these ancient thoughts into a small damp ball and fire them way over the dull sad Morley street houses or drown them in a glass of water. As if a house could ever heal, make happy or pacify a noon-day demon. My secret imaginative background - this street righted through a simple shell script I thought might filter and sort all the stinking noise for me, here with this command:

Such a command I once thought might sort and recombine the chaotic stench here into palatable new meanings. Arthur C. Clarke knew this too int The Nine Billion Names of God, which features a Tibetan monastery with an automatic sequence computer, “compiling a list which shall contain all the possible names of God."

Somewhere there is a bridge to a sorted world. But unfortunately I have lived my whole life long with a fear of bridges. Gephyrophobia. Though I have tried to recreate bridge like structures in my code, Dra/Dar is a bridge too far.

Perhaps it will shock you to hear me
talking of smoking as a form of religious
practice - or rather the configuration of
smoking-subject and cigarette as an
opportunity for putting into practice Buddhist
technologies.
Another Cigarette is another sediment of me,
whatever a ‘me’ really is, this habit makes a
concrete statue out of ‘me’. I’m all habit, I’m all
fixed, that’s all there is – this addiction, nothing
else. When I took away the cigarettes there was
nothing left. As if my molecules burst their skins,
that’s how thousands of people disappear every
year, they quit smoking and slip their chains. Off
they go, into the clouds, free at last. Unless they
replace one habit with another, as we are want to do –
perhaps, for example, the habit of judging smokers.
sedimenting habits of self-construction. Is ‘I’m not a
smoker’ as much of a trap as being a smoker?

I am not talking here of orthodox health matters, and, of course, not recommending smoking. The ill health I am alluding too is metaphysical. There
Are worse habits then smoking. Hubris itself is a from of unhelpful addiction – I was once enslaved by it, as my regular readers will know. Hubris, like smoking, can teach us how vulnerable we are to fantasies of permanent self-hood, and thus to a reduction that has ensnared entire cultures and continents to chains of reasoning and representation.