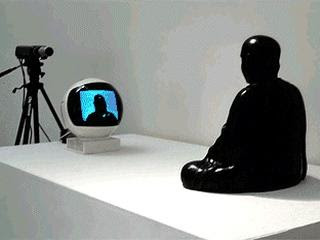 When I think of Nam June Paik's TV Buddha of 1974 an infinite loop unspools, in which, as Rupert Spira says, Presence Only Knows Itself.
'In reality the Self is only identical with itself, only one with itself. There is nothing else present with which it could be identical. There are not 'two things.'
..However, the personal 'I' is nothing other than the thought that thinks it.'
http://non-duality.rupertspira.com/page.aspx?n=3ab20a74-0b4a-4f29-b712-7cc38ab47fd2
The other day in the Creative Coding workshops we were working with two cameras facing each other and feeding an inifinite loop of self-observation, only both images were disturbingly offset and assymetric, it was hard to understand what we were observing, as if we were watching time-lapsed mirrors in which our own presence was occluded.
Posted by Eleanor Dare Journal part II at 11:36